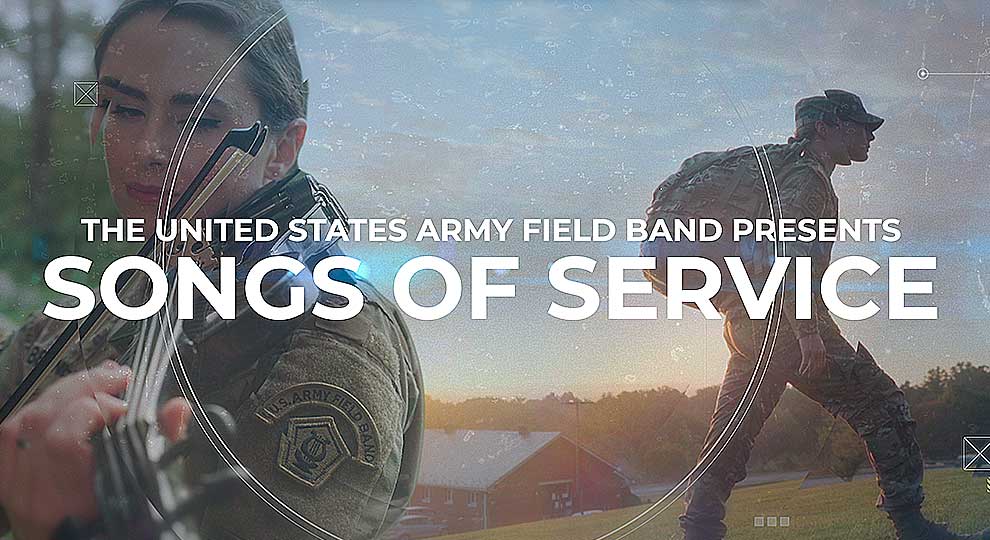 WASHINGTON D.C., DECEMBRER 1, 2021 -- The United States Army Field Band, We Are The Mighty, and Hiring America have partnered with CBS to broadcast a 30-minute encore musical special, “Songs of Service,” airing Saturday, December 11 at 7pm ET on New York Channel 2, at 7:30pm ET on Philadelphia Channel 4 {Check local listings}, ON-DEMAND on Pluto-TV as well as YouTube.

The United States Army presents a one-of-a-kind music special to honor service members from all eras who put up their right hand to defend our nation. Hosted by Emcee Toni Trucks (CBS SEAL Team), “Songs of Service” incorporates musical performances by the U.S. Army Field Band as well as a special rendition of “Fortunate Son” with Creedence Clearwater Revival’s John Fogerty, and the Army’s Six-String Soldiers band.

This year, the U.S. Army Field Band celebrates its 75th anniversary. Founded on March 21, 1946, General Jacob Devers commissioned Chief Chester E. Whiting to, “Organize a band that will carry into the grassroots of our country the story of our magnificent Army, its glorious traditions and achievements.” Since its formation, the Field Band has appeared in all 50 states and in more than 30 countries on four continents.

The organization’s four performing components -- the Concert Band, the Soldiers’ Chorus, the Jazz Ambassadors, and the Six-String Soldiers -- each travel over 100 days annually. Tours include formal public concerts, school assemblies, educational outreach programs, festivals, and radio and television appearances. Seventy five years later, the United States Army Field Band continues to connect America to its Army by telling the Army story and honoring our soldiers and veterans earning the title of, “Musical Ambassadors of the Army.” Col. Jim Keene, Commander US Army Field Band, shares, “The United States Army Field Band is very proud to be a part of telling the amazing stories of those who have served on America’s behalf.”

In “Songs of Service,” Emcee Trucks guides the audience between musical performances and vignettes from veterans as well as active duty service members from World War II to present. Trucks says, “I’m so proud to honor all those who serve with so many amazing songs from the Army Field Band and even a special performance from Vietnam Veteran, John Fogerty. Songs of Service is an amazing tribute to all those who have served past, present and future.”

Directed by Robert Ham, an Army veteran, “Songs of Service'' was shot at eleven different locations in the DC area to include the Women Veterans, Pentagon 9/11, Vietnam and World War II memorials. Ham says, "I'm so honored to direct this wonderful special sharing the talents and story of the Army Field Band, working alongside one of my favorite musicians John Fogerty and with such amazing Hollywood talents like Toni Trucks and Laura Karpman. But as an Afghan war combat veteran what makes this extra special is it exemplifies the resilience and values that make America what it is.”

Military Influencer produces military-focused events and experiences for entrepreneurs, influencers, executives, and brands who shape and support the military community.